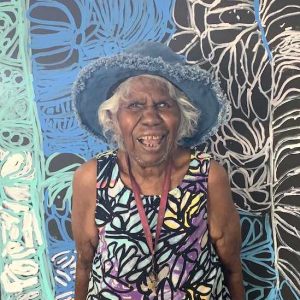 Sonia Kurarra grew up in the river country at Yungngora (Noonkanbah). As a young woman she assisted with teaching art to children at the Yungngora Kindergarten. They used to take the children out to the Sandy Billabong and teach them how to paint and dance. There is an ngarrangkarni [Dreamtime] snake that lives in the billabong. His name is Nangurra.
Sonia began painting at Mangkaja in the early 1990s working mostly on paper. Since 2008, Sonia has been working predominantly on canvas and more recently perspex her practice has become more recognised and included in major awards. Sonia’s work is now in most major collections within Australia and highly sought after by both national and international galleries and collectors.
Sonia paints the sandy billabong country along the stretch of the Fitzroy River that runs directly behind the community. After the food waters recede, there are billabongs that hold a plentiful supply of parlka [barramundi], kurlumajarti [catish] and bream. She paintsgapi[fish],parrmarr[rocks] where the Fish is cooked, ngurti [coolamon] and a karli [boomerang].
Sonia paints these images over and over as though they are etched into her psyche; works that are linear representations in monotones and others that are layers lathered on with wild and confident brush strokes and mark making. These contemporary compositions display an outstanding understanding of colour and composition. Sonia is one of the cornerstones of Mangkaja Arts and contemporary art making for the Fitzroy Valley region
ART AWARDS
2020 37th Telstra NATSIAA Award Finalist. Darwin, NT
2019 36th Telstra NATSIAA Award Finalist Darwin, NT.
2019 Dobell Drawing Prize Sydney, NSW.
2018 Hadley’s Art Prize Finalist, Hobart, Tas.
2018 35th Telstra NATSIAA Award Finalist, Darwin, NT.
2018 Wynne Art Prize Finalist, Art GAllery of NSW, Sydney, NSW.
2016 Port Hedland Art Awards Port Hedland, WA
2015 BankWest Art Prize
2015 Overall winner – Kimberley Art Prize
2012 Winner of Most Outstanding Work – Hedland Art Awards
2010 Winner of Best Indigenous work – WA Art Awards
2010 Winner of Best Indigenous work – Hedland Art Awards